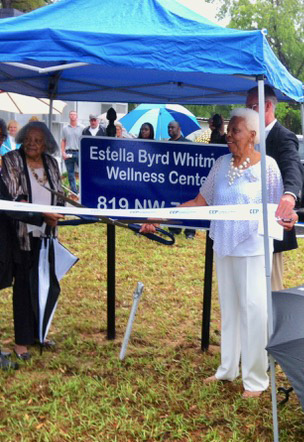 After eight long years, the Estella Byrd Whitman Wellness Center in Ocala, Florida, finally opened this spring. A ribbon-cutting ceremony was held March 19 at the new clinic, and about 100 members of the community attended, including the mayor, the city manager and former Gov. Buddy McKay, who gave the center its first donation years ago.

The wellness center is the brainchild of Carolyn Adams (B.S.N. 1972, M.S.N. 1973) and grew from a need for health care she and her husband, Arthur, recognized in the community years ago. The clinic experienced many delays throughout the years due to uninhabitable space, illness, funding and approvals.

Now the wellness center lives in a new doublewide mobile home and offers educational programs and resources to the community. As CEO, Adams has also partnered with the local health department and a local dental clinic to provide health services on a regular basis.

The center has about five volunteers, including a doctor, a community health worker, a program coordinator, a marketing director and Adams, who is the CEO and an ARNP.

Adams and her husband moved up to Ocala about 10 years ago from South Florida, where she spent her career as an employee health nurse and an assistant hospital administrator in Broward County.

“When we moved to Ocala, we looked around at our community and had to ask ‘Where is the health care in Marion County?’” Adams said. “The area we live in is called a ‘health desert’ because health care is not easily accessible.”

From there, the dream for the Estella Byrd Whitman Wellness Center was formed. Named after Adams’ grandmother, the clinic has been housed in a few rooms in the St. Paul African Methodist Episcopal Church on Seventh Street in Ocala for a number of years. Plans were put on hold when Arthur’s health declined and he passed away in 2013. But it wasn’t long before Adams was back working on the dream they had together.

“Eight long years to finally open,” she said. “I know my husband is smiling down on the clinic now.”

Adams said the goal moving forward is to apply for a United Way grant and to be named a Federally Qualified Health Clinic within two years to provide primary care and attract as many community members as possible.

Williams, who attended the ribbon cutting, was a mentor and adviser for Adams along the way.

“I made numerous trips to Archer Family Health Care throughout the years,” Adams said. “Dr. Williams totally embraced my idea for a clinic in Ocala and was more than accommodating with whatever advice she could give me on clinic policies, procedures and purchasing. The Estella Byrd Whitman Wellness Center would not be here if it were not for the advice I received from my classmate.”