Linda H. Aiken, PhD, RN, FAAN, FRCN, is the Director of the Center for Health Outcomes and Policy Research, and The Claire M. Fagin Leadership Professor of Nursing and Professor of Sociology at the University of Pennsylvania, Philadelphia. Dr. Aiken conducts research on the health care workforce and quality of healthcare in the U.S. and globally. She co-directs RN4CAST, a European Union funded study of nurse workforce and quality of care in 12 European countries, China, and South Africa. Her funded NIH research has received numerous awards including the Individual Codman Award from the Joint Commission on Accreditation of Healthcare Organizations for leadership utilizing performance measures to demonstrate relationships between nursing care and patient outcomes.

Dr. Aiken leads the International Hospital Outcomes Consortium studying the impact of nursing on patient outcomes in 13 countries. She was honored with the Academy Health Distinguished Investigator Award, the William B. Graham Prize for Health Services Research, and the Episteme Award from Sigma Theta Tau International. Dr.  Aiken is a former President of the American Academy of Nursing, Honorary Fellow of the Royal College of Nursing, a member of the Institute of Medicine of the National Academy of Sciences, and a Fellow in the American Academy of Arts and Sciences. Dr. Aiken received her PhD in sociology and demography from the University of Texas at Austin. She received her master’s and bachelor’s degrees in nursing from the University of Florida.

Ann Lurie is originally from Florida and obtained her Bachelor of Science in Nursing from UF. She currently resides in Chicago where she is president of Lurie Investments; president and treasurer of the Ann and Robert H. Lurie Foundation; and president of Africa Infectious Disease Village Clinics, Inc., a US-based charity. Following the death of her husband, Robert H. Lurie in 1990, she devoted herself to raising their six children while distinguishing herself as a committed and knowledgeable benefactor to a number of important causes. Before starting a family, Ms. Lurie worked in public health and pediatric intensive care nursing in Florida and at Children’s Memorial Hospital in Chicago.

Ms. Lurie has a deep commitment to global philanthropy which has included supporting the UK charity, Riders for Health, which creates and sustains health care delivery systems in Africa. She founded and personally oversees the operation of AID Village Clinics, a communicable disease initiative offering comprehensive medical clinics for a population of 100,000 Maasai in rural southeastern Kenya. In cooperation with Save the Children and ONE Love Africa, she funded construction of 30 rural schools in Ethiopia. She supports an HIV/AIDS initiative on the Burma/Chinese border; and sponsors the WE-ACTx pediatric care program for HIV/AIDS patients in Rwanda.

In concert with her commitment to medical research and child related health issues, Ms. Lurie endowed the Robert H. Lurie Comprehensive Cancer Center of Northwestern University; funded both the Diana, Princess of Wales Professorship in Cancer Research and the Jesse, Sara, Andrew, Abigail, Benjamin, and Elizabeth Lurie Professor of Oncology at the Cancer Center; and committed the lead funding for the Robert H. Lurie Medical Research Center of Northwestern University.

T. Mark Jones, BSN, received his Bachelor of Science in Nursing from UF in 1985. He is the President and an original shareholder of Ven-A-Care of the Florida Keys, Inc., an infusion pharmacy that has been in business since 1987. Jones and his company have been active in false claims act cases since the early 1990s. His nursing career has taken him from performing home health care visits for mostly AIDS/HIV patients in Key West to giving key testimonies to the U.S. Congress on pharmaceutical fraud.

In the late 1980s, Mr. Jones jointly founded Ven-A-Care, which delivered drug therapy to patients, many who were afflicted with HIV/AIDS, in their homes, allowing them to maintain a more normal lifestyle. Mr. Jones served as the home health nurse who visited many of these patients. Through a twist of fate, he and his Ven-A-Care colleagues found themselves investigating false claims issued by a competing pharmaceutical company. Ven-A-Care filed suit against the company for a breach of fiduciary duty, state antitrust violations and unfair competition. They also filed a false claims lawsuit as whistleblowers acting on behalf of the government.

The Department of Justice investigated the allegations and reached a settlement with the company, most of which was returned to states and the federal government. Since that time, Mr. Jones and his partners have consulted on many cases involving pharmaceutical fraud and helped provide information for lawsuits. Ven-A-Care was given the Taxpayers Against Fraud Whistleblower of the Year Award in 2006 for the work they have done in bringing back more than $1 billion dollars to the public fiduciary. Mr. Jones and his company have personally testified before Congress on price reporting issues concerning Medicare and have been commended by Congress for their work in the false claims act area. 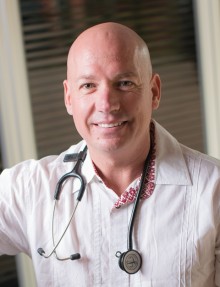 After graduating high school in Ohio in 1982, Paul Ingledue (BSN 1991) joined the Air Force. He met his wife, Consuelo (“Coni”), in New Mexico who was also in the Air Force. One day in 1985, while Coni was stationed in Austin, TX, he opened a newspaper to the classifieds and saw all of the job opportunities for nurses. That intrigued him, and he decided to become a nurse.

After graduating from the College of Nursing in 1991, his experiences included working as a nurse in a variety of units in North Carolina and Ohio. After moving to Arizona, he became friends with a cardiologist who helped him get a job as a recovery nurse for MedCath’s first outpatient cardiac testing center that included a cardiovascular lab. After about six months, he became director of the lab. After about a year in North Carolina where MedCath sent him to lead an outpatient cardiac testing center, he was given an opportunity at Gaston Memorial Hospital, one of MedCath’s busiest interventional cardiovascular programs. He continued to move up in the company, finally becoming the vice president of operations, where he was responsible for 17 cardiovascular programs and business development for new management companies.

MedCath continued to grow into a $1 billion a year company. After 14 years, Ingledue departed the company and embarked on what would be a successful partnership and friendship with one of his former colleagues, Chris Howard, to create Upstream Healthcare Management of New Jersey.

Ingledue and his partner ventured into physician-led management companies that manage hospital service lines. After developing HR Staffing Consultants, a large staffing company that provides a number of key hospital service line leaders/clinical staff/clerical staff, they were then challenged with building a physician network, Jersey Health Alliance in Hudson County, New Jersey.  The network started with two physicians in 2012 and has grown to over 500 physicians expanding into three counties in New Jersey.

Now living in Madeira Beach, Ingledue owns 31 companies, having branched out from the hospital business into more passion and hobby-driven businesses along the way. He bought a motorcycle business called CamTech that designs and fabricates parts that they sell nationally along with building custom motorcycles. CamTech is in the process of expanding outside of the United States and launching a motorcycle apparel business.   He also owns a very successful restaurant in Matthews, NC, called Kristopher’s Sports Bar & Restaurant and plans to open another near Charleston with a motorcycle theme.

His success was recognized and honored in early February 2015 during the Gator100, an inaugural UF event that recognizes the 100 fastest-growing businesses owned or led by UF alumni. Ernst & Young calculated each company’s compounded annual growth rate over the past three years to generate the ranking. Ingledue was ranked 23rd.

Rita Kobb, MN, APRN-BC, (BSN 1981, MSN 1996) is the Education Program Specialist at the Veterans Health Administration Office of Care Coordination and the Director of VISN 8 Sunshine raining Center of Care Coordination and Telehealth with the North Florida/South Georgia Veterans Health System. She received her bachelor’s and master’s degree in nursing from UF. Ms. Kobb specializes in Care Coordination/Care Management, Home Telehealth Consulting, and Gerontological Nursing and has been involved in more than 65 publications and creative works.

Ms. Kobb is a national speaker about care coordinationand home telehealth in VHA. She is a recognized expert consultant in care coordination and home telehealth and serves as Chair of the American Telemedicine Association’s Home Telehealth Special Interest Group. Ms. Kobb’s leadership in the field of technology and health care has been recognized by the Veteran’s Administration Hospital System for her innovative approaches to improving care.

Rita’s professional career extends to her dedication to Gator Nursing and can be seen in her years of tireless service on the College of Nursing Alumni Council Board. She remains passionate on providing ways to assist students with scholarships, and her personal efforts toward the annual Reunion Weekend Silent Auction has garnered thousands of dollars which go to the Alumni Council  Student Book Awards. A College of Nursing lectureship was endowed in honor of Ms. Kobb titled “The Rita Kobb Lectureship in Nursing Informatics and Technology” to pay tribute to her outstanding accomplishments in this area and her enthusiasm for Gator Nursing.