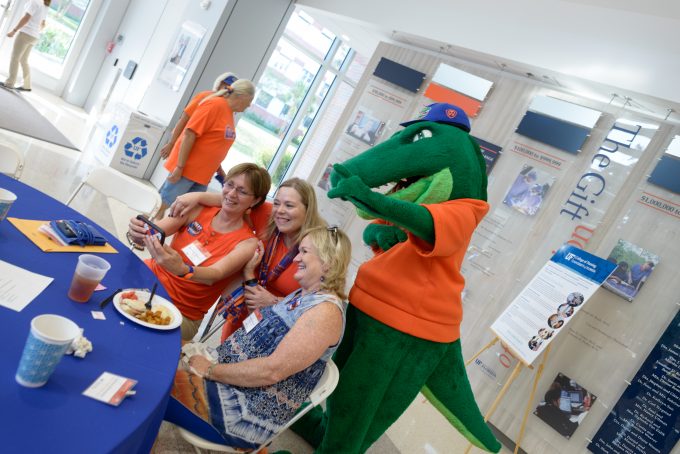 Elaine is enjoying retirement from a long and active nursing career and appreciates her ability to invest time with the College of Nursing Alumni Council. Her UF nursing education brought many unique opportunities: Public Health Nursing (PHN) in Okaloosa and Hillsborough counties; School of Nursing faculty, University of Miami; Private pediatric practice as ARNP, PNP, Gainesville; and College of Medicine as ARNP, Educator and Research in the Division of Pediatric Genetics, in the Movement Disorders Center, and in the Division of Nephrology. Elaine lives in Gainesville with her husband, Jim. They have three adult children and four wonderful grandchildren, and one granddog!

Elaine would love to hear from Gator nurses and can be contacted at jawhidden@cox.net.

Blair can be reached at blair.hebner3@va.gov

Pat Sassner is currently working at the NF/SG VA Health care system as a NP in a Primary Care clinic.  She has been an active member of the UF Board of  Nursing Alumni Council since her graduation in 1997.  She is very active as a preceptor for the UF NP program and was named the 2012 UF College of Nursing Preceptor of the Year.  Pat is also an associate professor, doing clinic rotations for the UF undergraduate nursing program.  She is married with one child.

Pat can be reached at eaglei23@aol.com

Professor Irving retired as a faculty member from the College of Nursing in 2011. Although retired, Irving continues to teach part-time in the graduate-level psychiatric-mental health NP program and selected courses in the undergraduate program. In addition, as an ARNP she engages in a private practice that she established in 1973. She joined the Alumni Council in April 2007, and serves as the Philanthropy Committee Chair.

Jodi can be reached at irvinja@ufl.edu

Rita can be reached at rita.kobb@va.gov

Peggy has been a registered nurse for 35 years.  She was a critical care nurse for many years and worked in various leadership roles for AvMed SantaFe.  She was awarded an American Lung fellowship and earned her Master’s degree as a clinical nurse specialist from the University of Florida.  After moving to Tampa with her family in 2005, she became a Healthcare Partner at Ernst & Young and worked with nurses and doctors providing consulting services to hospitals across the United States.  She was hired by Ross Perot to build a clinical division for Perot Consulting and later led healthcare clinical consulting practices for IBM & Siemens,  focusing on using technology to improve clinical outcomes and care in the U.S., Europe and the Middle East. Peggy has been active at the national level with various healthcare organizations including HIMSS, AONE and Magnet.  She retired in 2014 to spend more time with her husband, Denny, three grown children and three precious grandchildren.  Peggy enjoys traveling, all Gator activities and medical mission work.

Peggy can be reached at phrodebush@aol.com.

BarBee recently retired from the NF/SG Veterans Health System in Gainesville, Florida as Chief Nurse, Ambulatory Care. As of 2018, she has been married 44 years to her wonderful husband and best friend, Chuck. She has three grown children, Macy, Austin and Kent, and three wonderful grandchildren, Max (13), Audrey (6) and Thomas (4). Her hobbies include reading, golf, sewing, cooking and gardening. She grew up in Gainesville, but lived her married life in many states in the US until she moved back to Gainesville in 2000 to be nearer to her family. BarBee would love to hear from her 1974 classmates, and she can be reached at barbeegeiger@hotmail.com

Susan has been a registered nurse for 47 years. After graduating from Ohio State University with her BSN, she worked in many areas of healthcare including: operating room, bedside nursing, office nursing, blood bank nursing, school nursing, and higher education. For 28 years, Susan has been a Professor of Nursing at Valencia College, retiring in 2011. Her emphasis included adult care and leadership theory. Susan is proficient in online and classroom teaching. She earned her Master’s of Science in Nursing from the University of Florida with majors in Administration and Community Health. Susan is a published author and has presented frequently at both state and national meetings. She also owned several health-related companies providing marketing and consulting services. Susan served as a founding board member for BETA and Health Care Center for the Homeless. She also served as President of Florida Nurses Association District 8 and was a long-term Ombudsman for the State of Florida. She is still working as a health screener and coach for several companies serving Florida residents. She also teaches for the University of Central Florida College of Nursing. Susan continues to remain actively involved in several community associations. Presently, she resides in Longwood, Florida, with her husband, a retired physician. They have four children and six grandchildren.

Susan can be reached at gogostoney@gmail.com

Kim graduated from the University of Florida in 1976 with a Bachelor of Science in Nursing. She has an MBA from Southern Illinois University, a PhD in Adult Education and a Master of Science in Nursing, both from the University of South Florida. She is a nationally certified Family Nurse Practitioner. She currently serves as a Clinical Assistant Professor at the UF College of Nursing. She also serves as a primary care provider at a privately funded clinic providing care to the medically underserved. She is married with one child and enjoys running, scuba diving, and reading.

Kim can be reached at kcurry_1@msn.com.

Karen enjoys working with the alumni council and has been very connected with the college since graduating.  In the late 1970s, she worked with other Central Florida nurses to bring graduate nursing education to Orlando, and subsequently earned her master’s degree at the Orlando campus of the University of Florida.  She is currently retired after recently serving as a Process Architect with the MIS department at Florida Hospital in Orlando.  She was involved with coordination and facilitation of training 10,000 clinical staff across 7 campuses for a new electronic medical record.  She has 3 children.  Scott, 38, is a high school administrator and has 2 children.  Brett, 35, works as a government contractor in computer security and has 3 children.  Michelle, 26, is an environmental engineer living in Los Angeles, enjoying single life and pursuing her mountain biking and adventure racing activities.

Karen is an avid Gator fan, having had season football tickets for 30 years and looks forward to her grandchildren being old enough to accompany her to games.  Cross-stitching is a favorite past-time and she has crafted and donated several pieces for auction at reunion weekends.
Karen can be reached at khanson@cfl.rr.com

**If you would like to learn more about serving on the Alumni Council Board, please contact the College of Nursing Development & Alumni Affairs Office at 352-273-6409 or via e-mail at jclayton30@ufl.edu.